The McHenry County Council of Governments (MCCG) visited legislators as well as Gov. Rauner, following the governor’s Feb. 17 budget address. A different tone surrounded most of the legislative meetings this year from last year. A year ago, the governor’s proposed 50% cut to the Local Government Distributive Fund (LGDF) loomed large, along with several other pieces of proposed legislation that threatened local governments, such as freezes to property taxes and additional Freedom of Information Act compliance requirements. The focus of MCCG and sympathetic legislators at that time was minimizing the LGDF reduction.

In contrast, not one of the elected officials that MCCG met with, including Gov. Rauner, supported much less suggested a cut to the LGDF. The governor went so far as to say he did not really want to cut the LGDF last year. The governor’s budget address highlighted education funding as a priority, which Sen. Pam Althoff later noted would be implausible with a property tax freeze. Several of the legislators, including Rep. Mike Tryon, and the governor were receptive to the notion of placing a minimum fiscal threshold for Prevailing Wage to apply to projects.

A separate focal point for MCCG was its transportation agenda, specifically the need for the state to support key highway extensions and expansions in McHenry County. In addition to the general support MCCG received from the various legislators on the road improvements, the governor specifically identified McHenry as one of the state’s keystone counties to actualize his plan of stimulating economic growth by attracting businesses. Providing the highway infrastructure was an acknowledged element of the governor’s plan.

At this point, everything that was discussed during the MCCG visit was conversation with no certain action in place.

However, the legislators’ nearly uniform support of MCCG’s major legislative and transportation initiatives reflected a tone of optimism that did not exist a year ago in Springfield. 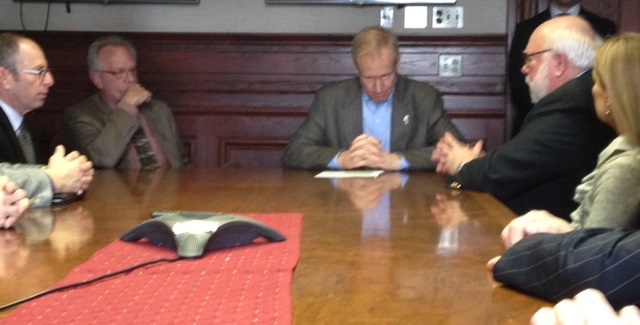